A lack of late-stage megadeals in the first quarter of 2021 caused venture funding of tech companies in the Waterloo Region to plummet to the worst levels seen in two years, according to Hockeystick’s latest ecosystem report.

“It may be a sign that there are not enough scale-up companies in the overall ecosystem.”

In Q1 2021, tech companies in the Waterloo Region closed 14 deals with a combined value of $14.7 million CAD. Not only is this a 95 percent decrease in total funding compared to last quarter, but it is also an 89 percent decrease in funding from the first quarter of 2020.

During Q1 2021, other tech ecosystems across Canada either experienced their best quarter ever or were on par with previous quarters. Conversely, Waterloo Region saw its worst quarter ever in total investment since at least Q1 2019.

Hockeystick also found that if all megadeals closed between Q1 2019 and Q1 2020 were removed from previous quarters, Q1 2021 still had the lowest total investment for the Waterloo Region.

“While a part of this can be explained through the large investments in Applyboard, Faire, MioVision, eSentire and others in previous quarters, it may be a sign that there are not enough scale-up companies in the overall ecosystem,” said Rob Darling, research partner at Hockeystick.

Despite the low levels of funding, Waterloo Region companies saw a 75 percent increase in deals from Q4 2020. Deal volume also managed to double from the same quarter last year, made possible by a heavy share of early-stage funding in the region.

“The number of deals in Waterloo Region for Q1 is definitely healthy compared to other ecosystems like Calgary and Montréal,” Darling said.

In terms of which sectors were raising funding, Hockeystick found artificial intelligence startups led the way, comprising 18 percent of the deals. There were also a number of deals across retail, SaaS, and cybersecurity. 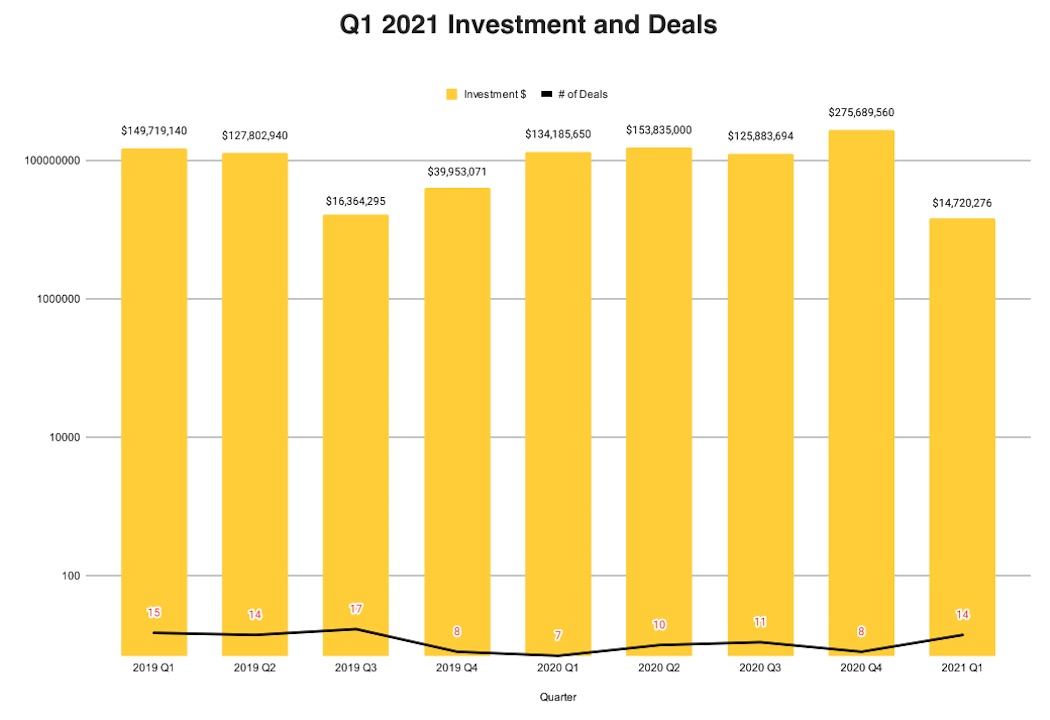 Hockeystick found if all megadeals closed between Q1 2019 and Q1 2020 were removed from previous quarters, Q1 2021 still had the lowest total investment for the Waterloo Region. (Source: Hockeystick)

In 2020, Waterloo Region tech companies saw a healthy spread of deals across the early and late stages, with early-stage deals accounting for 36 percent of funding. In Q1 2021, deal volume was heavily skewed toward the early stages.

The high proportion of early-stage deals is in line with the common description of Waterloo as an early-stage tech hub. The region has gained this reputation in part due to its strong network of accelerators, incubators, and hubs that provide key early-stage support. The Waterloo region is also well known for its engineering programs from local universities, which help generate both talent and intellectual property.

Last year, a handful of late-stage megadeals contributed heavily to a strong year of funding in the Waterloo Region. These included Faire’s $222 million raise, Miovision’s $120 million investment, and ApplyBoard’s $170 million Series C round.

No such megadeals closed in Q1 2021, which explains why overall investment fell so dramatically. In fact, Hockeystick tracked only one deal classified in the Series A or later stage during the quarter. This was Clearpath Robotics’ $6.3 million Series C extension raised in February. Clearpath Robotics initially pulled in $40 million in June 2020, and later added $6.6 million to that round in September. 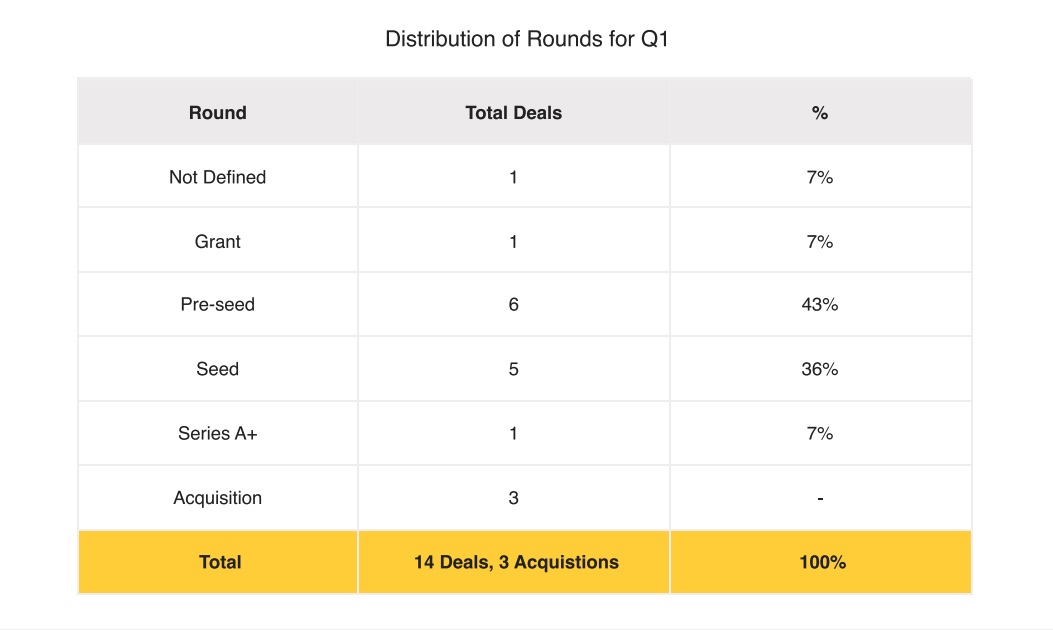 Hockeystick also tracked three acquisitions and one grant issued during the first quarter. The acquisitions included Emerge Commerce’s acquisition of TruLocal for $16.8 million, as well as the acquisition of Athena Software, a healthtech software startup, and the acquisition of Octupuz, a robotics software company. The financial terms of Athena’s and Octupuz’s rounds were not disclosed. These deals indicate that dollars still managed to flow into the ecosystem, albeit through alternative means to venture funding.

“These are additional signals that an ecosystem is growing for companies that are strong in technology advancement and solid in business fundamentals,” Darling said.

Despite the low levels of investment during Q1 2021, the Waterloo Region houses tech companies that are continuing to see success. In the month of June alone, a number of companies in the region secured sizable investments, including Tulip and SkyWatch. Faire and ApplyBoard have also raised significant megadeals this month.

“Based on patterns in the past quarters, I am sure we will see a funding uptick in future quarters this year as Applyboard, Faire, and others continue to grow,” Darling added.

The post Waterloo Region sees worst quarter for VC investment in two years due to lack of late-stage deals first appeared on BetaKit.