While Hootsuite’s IPO dreams might not be dashed, they are delayed, as a frigid public market response to tech IPOs has motivated the Vancouver-based social startup to reevaluate its timelines.

BetaKit was first to report in October that Hootsuite planned to IPO on the TSX before Christmas, with a target to raise $200 million CAD to fuel the company’s acquisitive entrance into the social commerce space.

Sources familiar with the company’s operations have indicated to BetaKit that while Hootsuite is set to make a ‘go-no go’ call this week, it is highly unlikely the company will be able to meet its original timeline.

“The window has closed” for new Canadian tech IPOs this year, one source told BetaKit.

“The window has closed” for new Canadian tech IPOs this year, one source told BetaKit.

The reticence to go public on Hootsuite’s part has been fuelled by a number of Canadian tech sector IPOs that have so far produced dismal results, ​with The Globe and Mail reporting that the average return for a tech sector IPO in the past year is minus 2.4 percent compared to 16 percent for the average stock market.

Some of the troubled IPOs in the last few months include Kitchener-Waterloo-based EdTech company D2L, which closed with roughly $50 million less than it originally anticipated after reducing the size and pricing of its offering, and Sharethrough postponing its IPO entirely.

Coveo is one of the few tech companies to emerge unscathed from the public markets. The company successfully closed its IPO on November 24, raising $215 million following its Toronto Stock Exchange debut.

But even if Coveo is enough to entice Hootsuite to push ahead with its original IPO plan, time is getting tight.

Dani Lipkin, director of global business development for the TMX Group (owner of the TSX and TSX Venture Exchanges), told BetaKit that the period leading up to the holidays is a time with not many people around, and to go public during and around the last week of December would “probably be a bit more unusual.”

“But it’s not to say nothing would get done then,” he added. “It would be a little bit more unusual to see an IPO during the last week or two of the year.”

Still, Lipkin noted that the virtual roadshows made popular since COVID-19 have changed some of the timings as well, given that people can take meetings from anywhere in the world. “If there’s a good company they want to meet and want to invest in they will take that meeting on their phone, on their laptop, on their iPad wherever they are.”

Lipkin called the current rash of IPOs “the greatest period ever for tech in Canada,” and cautioned that judging a company on its performance days or weeks after isn’t necessarily a proper benchmark. He added that going public is just a step along the journey for the company, and success is gauged over the long term. “In the short term there’s too much noise that can detract from that specific company’s actual performance,” he said.

That may be true, but startups are watching IPO performances and making decisions about their successes or lack thereof. Sangoma Technologies Corporation announced November 15 that it intended to go public on the Nasdaq Global Select Market only to reverse course two days later citing “market conditions,” and saying “at current share price levels, the offering is no longer attractive to the company or its shareholders.” 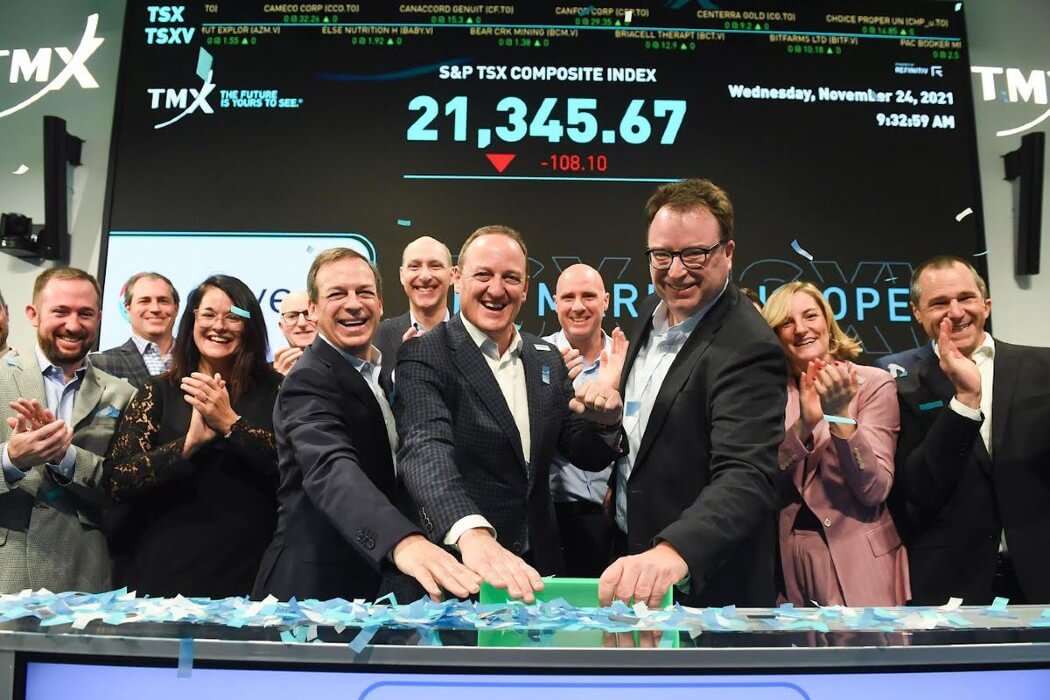 Coveo is one of the few Canadian tech companies to see early success after IPO this year.

That’s precisely the sort of situation Hootsuite doesn’t want to find itself in. While a post-IPO dip wouldn’t likely harm the overall value of new capital, the bigger fear is having the IPO pulled because of declining interest. If that took place, investors could view the company in diminished light, leading to an extended wait for another IPO attempt.

Sources have suggested to BetaKit that it’s the safer decision for Hootsuite to wait.

Whether or not an IPO (or initial prospectus) comes before the end of 2021, Hootsuite has still been working to put the pieces in place.

Per those sources, Hootsuite has been working with bankers for the last several months to build towards a public listing (TD and JP Morgan are jointly leading), following an acceleration in growth this year. Hootsuite currently sits north of $200 million USD in ARR, and is growing revenue at a rate of 20 percent annually; that number sits well above the single-digit growth the company saw last year.

A source familiar with the company’s plans, but not authorized to speak publicly, told BetaKit: “This is a step to going public.”

BetaKit was also the first to report that the social media marketing and managing startup had quietly revamped its board with new members more suited to a public company. The latter move is part of the playbook when startups prepare for IPOs; Coveo, for instance, added three high-profile board members with extensive public company experience before going public.

Publicly revealed this week, the board changes coincide with Hootsuite co-founder Ryan Holmes stepping down as chairman.

The new additions to Hootsuite’s board include Julie Herendeen, a corporate director who is taking over from Holmes as board chair. Herendeen is also on HubSpot Inc.’s board, and has previously led global enterprise marketing at Uber.

Also joining the board is Christiane Pendarvis, co-president and chief merchant office at Savage X Fenty, a lingerie brand; Dave Singh, the CFO at Tucows, and former CFO at Telus International; and Carl Sparks, a managing partner at the early-stage venture capital firm Interlock Partners, who has served on the board of such public companies as Avis Budget Group, Dunkin’ Brands, and Vonage Holding Corp.

A source familiar with the company’s plans, but not authorized to speak publicly, told BetaKit: “Companies always have to upgrade their boards before going public. There is much more emphasis on independents. This is a step to going public.”

The IPO also comes after years of struggle for Hootsuite, which was once valued by research firm CB Insights at $1 billion USD. Focus and product struggles led to reports that Hootsuite was seeking a buyer in April 2019, but could not secure a valuation higher than $700 million USD. No deal went through, and, in May 2019, it was revealed that Hootsuite had laid off 100 employees, or 10 percent of its workforce.

Later that year, Holmes stepped back from his role as CEO and the social media company overhauled its executive team, with the company announcing in June 2020 that Tom Keiser, former COO at US-based Zendesk, would take over as CEO.