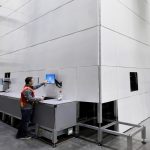 Two robotics supply chain startups battling over a pair of patents partially received judgements in favour – and against – their claims.

Much of the dispute centers around language and the description of the patents.

Attabotics’ initial complaint alleged that Urbx has and continues to infringe two patents held by Attabotics, by “making, importing, using, selling, and/or offering to sell in the United States a robotic storage and retrieval system embodying [Attabotics’] patented invention.”

This would allow the patent infringement litigation from Attabotics against Urbx to proceed.

However, the court’s ruling shows that US District Court Judge Allison Burroughs ruled that on the first patent in question, part of Attabotic’s claim was dismissed, while allowing a portion to proceed to claim construction.

Urbx and Attabotics both operate in the automated fulfillment space, and aim to help close the last-mile delivery gap by replacing the rows and aisles of traditional fulfillment centres with robots and taller, more condensed structures that leverage vertical storage space.

Urbx filed its motion to dismiss the patent infringement claims in 2021 after Attabotics filed a patent infringement claim against the company earlier that year. Urbx asserted that its technology, which uses two robots to select and deliver products from within the gridded storage system, could not possibly infringe Attabotics’ patents, as Urbx claims the former only uses a single robot that can move laterally and vertically.

Much of the dispute centers around language and the description of the patents. “These disputes are best resolved with the benefit of claim construction,” Burroughs wrote, adding that the court declined to dismiss the complaint over the second patent.

The judge also noted the court is not currently engaged in claim construction, but was instead being asked to evaluate the sufficiency of the complaint. The judge also pointed out that the language of the patent’s specifications was not “clear enough on its face to warrant dismissal.”

For the remaining claims, the court documents stated that “Urbx’s arguments may very well carry the day as the proceeding unfolds.”

For Attabotics to assert that this ruling represents a victory for them rather than a significant setback is deeply misleading, the lawyer said. “Urbx intends to aggressively defend its cutting-edge products and is confident that it will be able to dispose of this litigation at an early stage, while continuing to develop innovative solutions in this growing market,” the firm’s counsel added.

Urbx is represented in this matter by Andrew Gish, Marti Johnson, and Raymond Bilderbeck of Gish PLLC, and Theodore Folkman of Folkman LLP.

Attabotics declined to comment, deferring to its press release published on June 29.

Founded in 2015, Attabotics describes itself as “the world’s first 3D robotics supply chain system for modern commerce.” The startup seeks to reduce warehouse needs and enable retailers to place robot-powered fulfillment centres closer to urban areas. The startup has fulfillment centres across North America, and has been adopted by apparel, food and beverage, and home goods brands, including Nordstrom. Attabotics has more than 300 employees.

Attabotics has attracted more than $106.8 million CAD ($83 million USD) in investments from Canadian pension plans and US-based private equity and venture capital. The startup most recently raised $66 million CAD in a Series C round in 2020.

Founded in 2019, Urbx touts itself as “the world’s first on-demand robotics fulfillment system for last-mile delivery.” The company uses robotics to enable retailers to automate the in-store picking process, leveraging vertical architecture and a dual-bot system to limit its physical footprint and permit real estate cost-savings.